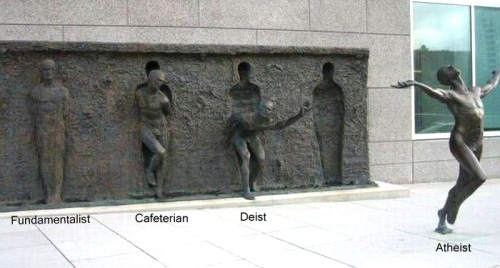 I’ve been out about 4 years now, and it’s the greatest feeling in the world. I feel so free and so happy. This is a feeling I want for all people who are oppressed by religion—anyone tortured by the threat of hell, anyone in the LGBTQ community, women oppressed by religion, anyone who has been hurt by genital mutilation or whose face has been burned with acid, anyone who has been discriminated against or who fears coming out because they are scared of losing their friends, family, or job… anyone who is not benefitting from potentially life-saving scientific advances because of religious hinderances on stem-cell research, anyone who is suffering through an unwanted pregnancy because of religion, anyone who cannot get access to birth control she wants because of religious hinderances, anyone who cannot get all of the care they need because they are in a Catholic hospital, anyone who is being forced to listen to or participate in prayers in schools or in the military, anyone whose life is in danger because they do not believe in a god and it is illegal in their country.

I want everyone to be free. No one is free while others are oppressed. Changes are happening—slowly, but surely. We are winning this fight. We know it. They know it. And I am so proud to be a part of it. This is history in the making.

Be proud of your atheism!

Your ticket for the: Atheist Pride Day