December 5: The 80th anniversary of the Twenty-First Amendment to the Constitution of the United States

Today marks the 80th anniversary of a hard-fought and significant victory for separation of religious “morality” from government enforcement.

On December 5th, 1933, the Twenty-First Amendment to the Constitution of the United States passed, repealing the Eighteenth Amendment and ending national prohibition of the sale, production, importation, and transportation of alcoholic beverages. The exceptions were alcohol for chemical and industrial uses and communion wine. The Volstead Act, as it came to be called, passed despite President Wilson’s veto. The federal government enforced the act through the Department of the Treasury, which lacked the resources to enforce it—only 1,520 officers were assigned to the task. It’s estimated that in 1925 there were as many as 100,000 “speakeasies” (underground bars) in New York City alone. This greatly expanded the influence and wealth of the American Mafia and organized crime in general as they moved into the roles of producing and distributing alcohol in addition to providing “protection” from law enforcement.

The prohibition movement was led by Protestants and grew out of the temperance movement of the 19th century. The New Testament has stern things to say about drunkenness and saloons were thought to be destroying American families, not just because of alcohol but because of things like dancing, music, and sex workers, as well. While alcohol addiction continues to be a serious health problem in the United States and around the world today, religious morality as a basis for secular law is unconstitutional and always has been.

Although the Twenty-First Amendment has been in effect for, as I said, 80 years now, the idea that biblical moral values should influence the rest of us still holds fast in many parts of the country. Alcohol sales are prohibited in many areas on Sundays or after certain hours, a prohibition with no secular backing whatsoever. There are so-called “dry” areas in this country where the production, transportation, sale, or consumption of alcohol is prohibited or very tightly restricted.

I am of the opinion that adults should be able to make up their own minds. If, for religious reasons, someone chooses to abstain from alcohol, cigarettes, caffeine, or anything else, that is her right. But passing a law that affects others in this way is against the letter and spirit of the First Amendment of the Constitution of the United States. Below, you’ll find a map of the United States showing  dry (red), wet (blue), and mixed (yellow) counties. 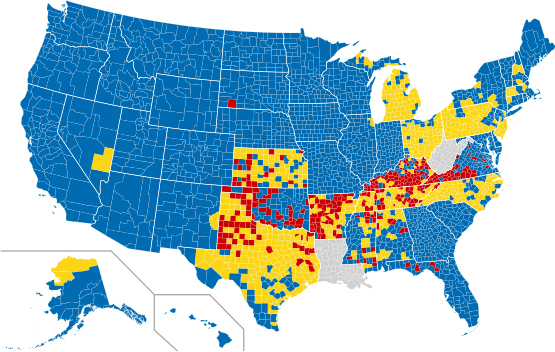 In October of last year, I visited Napa Valley on a road trip with a friend. I’m not much of a drinker, but I specifically wanted to go to Beaulieu Vineyards, one of the most-respected and oldest producers in the region. BV is historically important because it was the only Napa producer that did not shut down during Prohibition. The reason for this is that unlike other producers, there were able to strike a deal with the Catholic Church to produce sacramental wine for communion at masses all across the nation. They were able to buy up surrounding estates at a significant discount, and today are one of the largest producers in the United States. By the 1940s, following the repeal of prohibition, BV—as one of the only remaining commercial wineries in operation in the country—came to be the wine served at all White House functions.

Below is a picture of me with a row of wine barrels at the BV vineyard where the wine is fermenting before being bottled, and a picture of my road-trip friend “praying” to a HUGE vat of grape juice.

If you ever have a chance to visit, it’s worth an hour of your time: They do a wonderful tour and it’s an amazing history lesson surprisingly entangled with 19th and 20th-century United States religious history.

Register for the 2014 convention: https://www.atheists.org/convention2014

Your ticket for the: December 5: The 80th anniversary of the Twenty-First Amendment to the Constitution of the United States

December 5: The 80th anniversary of the Twenty-First Amendment to the Constitution of the United States