Atheists Challenge NY State Senator to Boycott His Own District

We have responded to State Senator Andrew Lanza’s hateful announcement by putting up another billboard in Lanza’s own district (Staten Island). The billboard is a digital board and went up late Wednesday night.

We are putting this board there as a challenge to Senator Lanza. He claims to have been so offended by the first board that he was willing to call for a boycott of Times Square, where it was located. We are challenging him to call for a boycott of businesses in his own district to see if he really means what he says.
Attached is a graphic of the second billboard and a photo of it. The photo is from an automated webcam so it’s poor quality, but you can see that it’s up & running. We will try to get a better photo today if possible. Press release is below:
Cranford, NJ—On Thursday, American Atheists, whose Times Square billboard has been under petition for removal by New York State Senator Andrew Lanza since Friday, December 13, stepped up their advocacy by displaying a similar billboard on the Goethals Bridge to Staten Island, the district which Senator Lanza represents.

On December 13, Senator Lanza issued a press release expressing his outrage at the group’s Times Square message, calling the billboard “hate speech” and “religious persecution of the kind that similarly lead to the Holocaust” and even called for a boycott of businesses in Times Square. The digital billboard, a fifteen-second animation, begins with “Who needs Christ during Christmas? Nobody.” The animation continues with “Celebrate the true meaning of Xmas,” and a word cloud including traditions such as family, friends, food, and charity. The animation ends by wishing “Happy Holidays” from American Atheists.

In his release, the senator also called for the revocation of the 50-year-old nonprofit organization’s 501(c)(3) IRS tax-exempt status, saying that he “doesn’t believe that tax dollars should be used to spew religious hatred.”

“Senator Lanza seems to be unaware that there are millions of atheists right here in New York,” said American Atheists President David Silverman. “He accuses us of spewing religious hatred while he himself calls all atheists ‘malicious’ and ‘hateful’ for not believing in his god. We will not be silenced or smeared by a bigoted elected official, nor will we allow our members and the other tens of millions of American atheists to be slandered by a representative of our own government.”

“Lanza had no problem calling for a boycott of Times Square because of our message,” Silverman continued. “We stand behind our billboard and we want the people of Staten Island to know that they don’t need religion to have a great Christmas, either. We are putting up this billboard as a challenge to Senator Lanza. Now the question is, was the senator posturing, or does he have the guts to call for a boycott in his own district?” 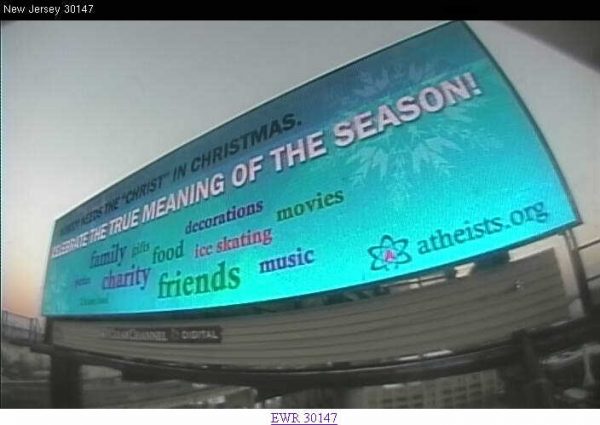 Your ticket for the: Atheists Challenge NY State Senator to Boycott His Own District

Atheists Challenge NY State Senator to Boycott His Own District