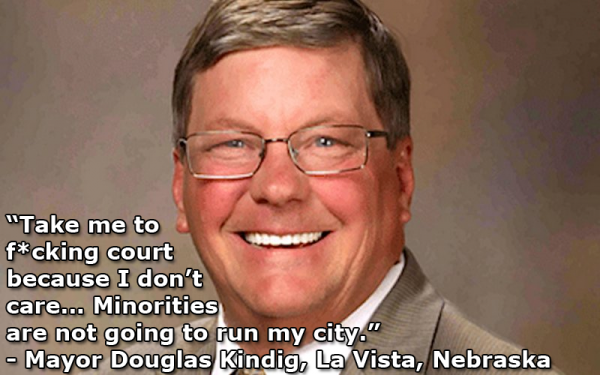 The rally, which will begin at 5:45 at La Vista City Hall, is scheduled to feature a diverse program of brief remarks from representatives of various minority groups in the Omaha metro area. Immediately following the rally, a “Meet the Atheists” potluck, open to all, is planned at Central Park a half-mile away.

The rally protests some of La Vista’s recent Memorial Day activities, which included a “Prayer Walk” and a “Faith and Freedom Day,” including an official “Service” led by a local Christian pastor. The activities, promoted on the city’s official website, included songs praising “Jesus” and overtly Christian prayers. After the religious service, a La Vista resident in attendance, Robert Fuller, approached the mayor to give him a business card and request a meeting at a later date about Mr. Fuller’s concern regarding separation of church and state at the service. Mayor Kindig responded to Mr. Fuller, an atheist and board member of Omaha Atheists, by stating, “Take me to f*cking court because I don’t care,” and “Minorities are not going to run my city.”

Following national media coverage of the mayor’s comments, Mayor Kindig’s staff has sent an email request for a meeting with Mr. Fuller, scheduled to take place on Tuesday, June 3, to which Mr. Fuller has agreed. Amanda Knief, Managing Director and In-house Counsel of the national group American Atheists, and Jill Fitzgerald, a spokesperson for Omaha Atheists, will accompany Mr. Fuller to the meeting.

“Mayor Kindig’s remarks about minorities are despicable,” said Ms. Fitzgerald. “Minorities create a healthy diversity and though atheists may be a minority in the Bible Belt, our government has a responsibility to represent us and our interests equally to those of all other citizens. It was Mayor Kindig who suggested a lawsuit, not us—we see this as an educational opportunity and a chance to build bridges.”

“At this meeting, we will have several objectives,” said Ms. Knief, who previously was an Omaha resident and journalist for the Omaha World-Herald and will also be attending the rally. “We will ask Mayor Kindig for a real public apology to all the minority groups of his community. We will also be putting the mayor and the city on notice that from this day forward we expect La Vista to invite representatives from every religious, humanist, and atheist group in this community to every future government-sponsored religious event. We will extend an invitation to Mayor Kindig as our guest to participate in the Apostacon secular conference in Omaha this September, where we hope he will work with us to create a plan to ensure that La Vista is an accepting place for all its citizens.”

Your ticket for the: Atheists to Host ‘Minorities Matter’ Rally After Nebraskan Mayor’s Outburst