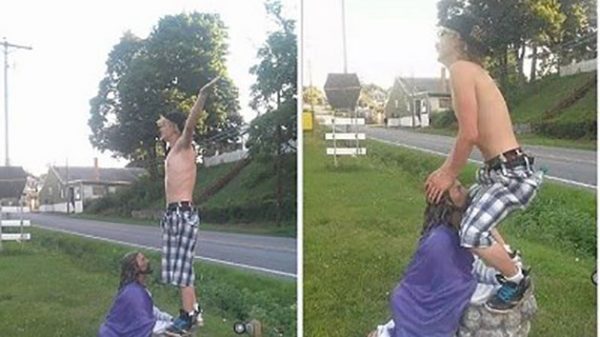 The images which caused a Pennsylvania teenager to be charged with a crime.

Cranford, NJ—American Atheists on Friday expressed their disappointment at the sentencing of a Pennsylvania teen for “desecration of a venerated object” stemming from photos the teen posted on a social media site with himself and a statue of Jesus in July.

“The fact that this teenager was charged with a crime at all is outrageous,” said American Atheists President David Silverman. “He may have caused offense to some, but he caused no damage. His only ‘crime’ was offending an overzealous district attorney.”

The boy was charged after he posted on a social media site photos of himself posing suggestively with a statue of Jesus on the front lawn of a church. The teen, whose name is being withheld because of his status as a juvenile, caused no physical damage to the statue and was not charged with trespassing on the church’s property in Everett, PA.

In a statement, Bedford County District Attorney Bill Higgins said that the religious rights of the Christian organization who owned the statue had been infringed.

“That is simply absurd. No one infringed upon the church members’ right to worship however they please. The only right that has been taken away is this teen’s right to speak in a way that apparently offended Mr. Higgins,” continued Silverman.

“District Attorney Higgins rightfully pointed out that no one has challenged the constitutionality of the statute which allowed him to prosecute this teen,” said American Atheists Managing Director Amanda Knief. “That sounds a lot like an invitation.”

The 14-year-old will be required to stay off social media for the next six months, must complete 350 hours of community service, obey a curfew of 10 pm, and will subjected to random drug tests. After successfully completing this program, the charges will be dismissed.

Last weekend, American Atheists joined with local activists, Pennsylvania Nonbelievers, and Truth Wins Out to protest the charges against the teen.

Your ticket for the: Atheists Decry Punishment of PA Teen for ‘Desecration’