Cranford, NJ—American Atheists stands in solidarity with those affected by the heinous terrorist attack at the office of the satirical magazine Charlie Hebdo in Paris Tuesday. We mourn the lives lost, offer our condolences to the families of the victims, and condemn this assault on free expression in the strongest possible terms. 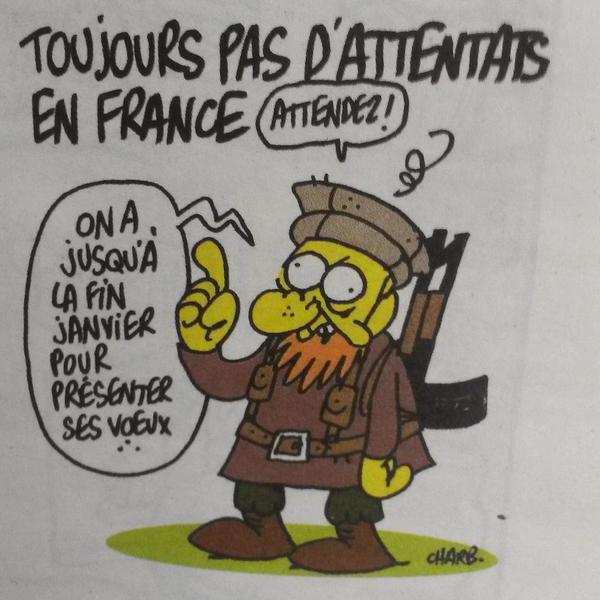 The last drawing by Charb, one of the journalists killed at Charlie Hebdo, “Still no attack in France. Wait! We can send best wishes until the end of January.”

This attack, reportedly carried out by Islamic extremists shouting “We avenge the Prophet Muhammad,” is not the first against Charlie Hebdo, which was firebombed in 2011 after it listed Muhammad as a “guest editor” of the magazine and published satirical cartoons featuring Islam. Charlie Hebdo has spared no target, mocking religious extremism of all stripes, politicians, celebrities, and others.

“The right to blaspheme, to criticize bad ideas, is a cornerstone of our civilization. I’m outraged and appalled at this attack in the name of religion,” said American Atheists President David Silverman. “The journalists and police officers murdered today gave their lives in defense of one of our most cherished rights. Their sacrifice must not be in vain.”

Charlie Hebdo editor Stephane Charbonnier, who was among those killed in the attack, said in 2012, “Muhammad isn’t sacred to me. I don’t blame Muslims for not laughing at our drawings. I live under French law. I don’t live under Quranic law.”

American Atheists will continue to strongly defend the absolute right of all people to criticize all ideas, including religion. We condemn any attempt to place the “rights” of ideas above the rights of people. We will stand with Charlie Hebdo by publishing and sharing the images found so offensive by these terrorists and we call upon media outlets, organizations, and individuals to do the same.

As a member of the International Humanist and Ethical Union (IHEU) and the International Association of Free Thought (IAFT), American Atheists stands with our partners in France and around the world in defense of free expression.

Your ticket for the: American Atheists Condemns Attack on Charlie Hebdo