Washington, DC—On Thursday, American Atheists announced that board member Jamila Bey will be speaking on the main stage at the Conservative Political Action Conference (CPAC), after the atheist civil-rights nonprofit was banned from tabling at the 2014 conference. American Atheists will also co-host an exhibitor table at this year’s event. 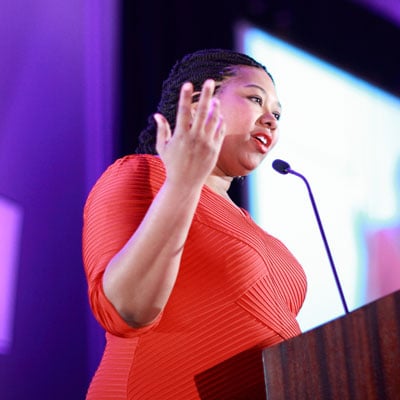 “Our message is simple: Atheists matter,” said American Atheists President David Silverman. “We’re returning to CPAC to make it clear that conservative does not equal Christian. The core principles many conservatives value—fiscal responsibility, individual freedoms, small government, low taxes, a free market—have nothing to do with the issues crusaded for by the religious right. Conservative lawmakers push away millions of atheist voters who want a responsible, small government and a free market, but can’t and won’t support religiously motivated laws that make our government bigger and more personally invasive.”

Bey, who is a journalist from the D.C. area, will speak on Thursday, February 26. Her speech will be the first by a known atheist speaking about atheist issues in CPAC history. Similarly, American Atheists’ booth presence will be the first organized presence of an atheist group promoting atheist awareness at the conference.

In 2014, American Atheists applied and was accepted for booth space at the largest annual conservative convention in the country. The organization paid the $3,000 booth fee, made travel and lodging arrangements, had materials printed, and even had a successful pre-conference meeting with Bey and CPAC organizers to discuss how conservative politicians could better find common ground with atheist voters.

American Atheists then distributed a press release announcing that it would exhibit at the conference. Immediately afterward, following pushback from religious conservatives, CPAC organizers pulled the atheist nonprofit’s exhibitor table and refunded the booth fee, citing Silverman’s assertive “tone” in interviews—even as the conference featured infamously outspoken conservative figures from the 2014 main stage. Although American Atheists was not permitted to table, Silverman registered as an attendee to distribute  materials and was well-received by press as well as attendees.

American Atheists will return to CPAC just 5 weeks ahead of its 2015 National Convention, April 2-5 at the Peabody Hotel in Memphis, Tennessee. Speakers include human-rights activist and politician Ayaan Hirsi Ali, HowStuffWorks.com founder and Discovery Channel host Marshall Brain, comedians Trace Bealieu and Frank Conniff of the cast of Mystery Science Theater 3000, and many more.

Your ticket for the: Ban Lifted: American Atheists to Speak, Table at 2015 CPAC