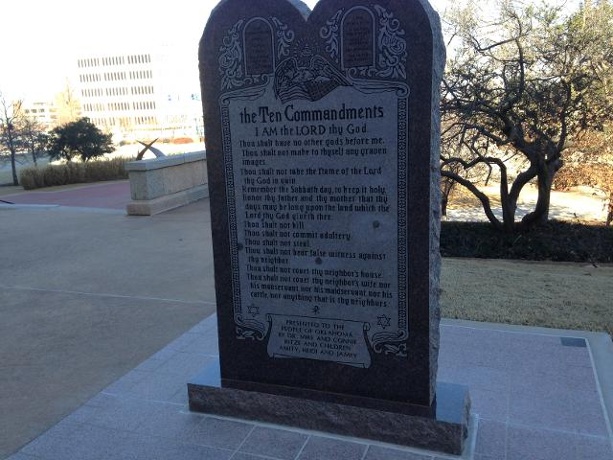 Oklahoma City, OK—The Oklahoma State Supreme Court has ruled that the controversial Ten Commandments monument placed on state capitol grounds is a violation of the Oklahoma Constitution and ordered its removal.

“This is a victory for anyone who values religious neutrality from their government,” said American Atheists President David Silverman. “The Ten Commandments have no place in government. They are incompatible with the protections of our Constitution and, as the Court rightly said, are obviously religious.”

American Atheists worked with the American Civil Liberties Union of Oklahoma throughout the litigation of this case, filing a companion case in Federal District Court.

“These monuments are unconstitutional, plain and simple. There is no question,” said Amanda Knief, National Legal and Public Policy Director of American Atheists. “We will fight any attempt to use government resources to advance religion, whether it’s happening in Oklahoma City or Washington, D.C.”

Added Silverman, “This is another example of Christian legislators thinking that their religion is somehow special. It isn’t. The Ten Commandments aren’t any more relevant than the statue of Baphomet proposed by The Satanic Temple. The sooner these lawmakers figure that out, the better.”

“We’re taking on these monuments wherever they are. If governments violate the Constitution, we will to take them to court, and we will win, just as we did in Starke, Florida.”

American Atheists has just filed suit in Levy County, Florida, challenging the installation of a Ten Commandments monument at the county courthouse.

The full opinion by the Oklahoma Supreme Court is available here.