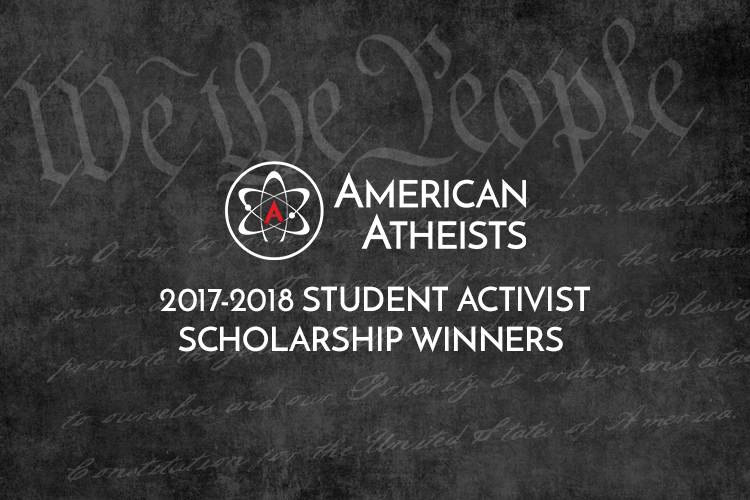 Cranford, NJ—American Atheists is pleased to announce the seven student awardees of $4,000 in scholarships for the 2017-2018 school year. This year’s winners include an ex-Muslim from Bangladesh, a student who founded an atheist group at his southern university, two women who combine their atheist activism with efforts to ensure LGBT equality, a student who uses discussions with Christians to educate about atheists, and two students using political activism to educate their elected representative about the atheist community.

“Student activists are the key to normalizing atheism in the United States,” said American Atheists President David Silverman. “Their outreach and ability to be open about their lack of religious belief is invaluable to the atheist community at large. We applaud these students as leaders and activists.”

This year’s awardees are:

Wilson is a sophomore at the University of Tennessee, Knoxville. After arriving at school, he found there were no student groups or organizations for atheists to come together so he founded a chapter of the Secular Student Alliance.

“I am very honored to be the recipient of such an honorable award. It is organizations like American Atheists that give people like me (African American Atheists) a home-like sense,” said Wilson.

Scott is a student at Georgetown University in Washington, D.C. She is from Alabama where she was the youngest person to serve on the board of the ACLU of Alabama. She advocates for the LGBT community as an atheist, helping to raise the profile of nontheism among her peers and the wider community.

“It is an incredible honor to receive the Chinn LGBT Atheist scholarship as an openly atheist and bisexual woman. My atheism and bisexuality are both critical to my identity and motivate the activism I do for atheists, the LGBTQ community, and other marginalized communities,” Scott said.

Douthitt will be attending the University of Kentucky in the fall. As an atheist, she has volunteered for organizations such as AIDS Volunteers, Inc. and Lexington Fairness.

“I am beyond grateful to receive the American Atheists’ Chinn LGBT Scholarship. To experience support from American Atheists in my beliefs regarding the separation of church and state and in my educational goals is an extraordinary gift. I will continue to use my education and eventually my degree to vehemently support the LGBT community and the normalization of atheism,” Douthitt said.

Meza Arenaza attends the University of Florida, and he video records his discussion about religion and atheism to show others how to positively spread the message of critical thinking.

“I will cherish the help given to me and use it to continue spreading a message of friendship and love for critical thinking.”

Firoz attends Genesee Community College in New York, and as an ex-Muslim from Bangladesh, Firoz writes and speaks out about the dangers of religious fanaticism.

“I am extremely grateful to American Atheist for supporting Bengali atheist like me. I have struggled a lot for my education. This is my first scholarship and all the money will be used for my education.”

Bissell-Siders is a freshman at the University of Maryland, and his activism includes contacting state legislators about bills that violate the separation of religion and government.

“I am proud to be a secular activist. I am also proud to receive this scholarship from the American Atheists, who make it their mission to raise awareness about the power of free thought to improve our lives and our politics. Let’s shine a light of reason across America,” Bissell-Siders said.

Marshall-Cort is attending Bowie State University this year, bringing atheist activism to a HBCU and volunteering with the Washington Area Secular Humanists, the Secular Coalition for America, and the Reason Rally.

“Winning a scholarship from American Atheists means an enormous amount to me as it allows me to continue my education and activism,” said Marshall-Cort.

Your ticket for the: Atheists Award $4,000 in Scholarships to Student Activists