Washington, D.C.—American Atheists today joined with ten other atheist and secular groups warning the U.S. House of Representatives Committee on Appropriations against attempts to undermine the so-called Johnson Amendment, an IRS rule that prohibits churches and other houses of worship, as well as 501(c)(3) charities like American Atheists, from engaging in partisan politics, including the endorsement of candidates.

Included in the 2018 Financial Services and General Government Appropriates Bill is language that would prohibit the Internal Revenue Service from enforcing the prohibition on politicking, but only as it applies to churches and other houses of worship.

“Section 116 of this bill is an outrageous attempt to give even more special treatment to churches and give houses of worship a free pass to ignore the law,” said Nick Fish, National Program Director for American Atheists. “Allowing unaccountable organizations that fail to disclose even the most basic information about their finances to wade into the political arena would be a devastating blow to our democracy and would open the floodgates for even more dark money in politics.” 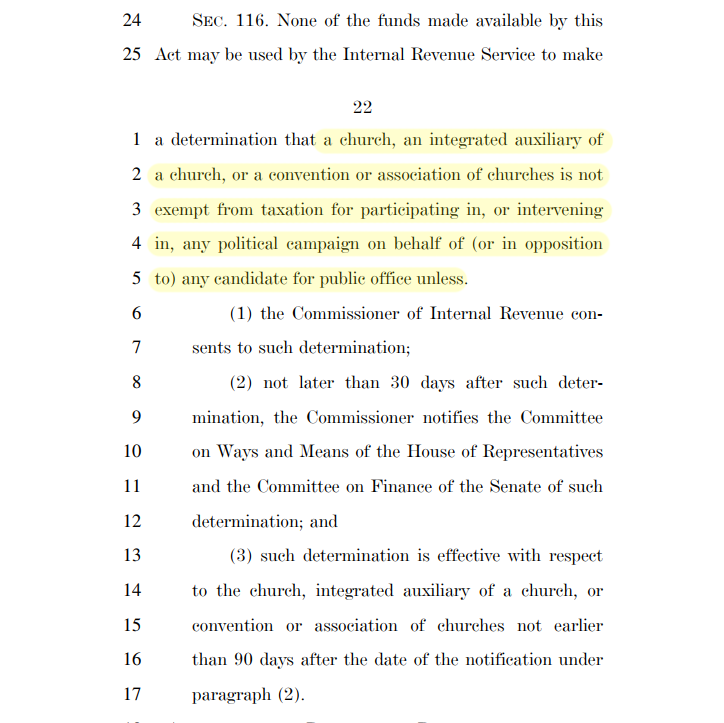 Unlike charitable groups and nonprofit organizations like American Atheists, churches and other houses of worship are exempt from filing IRS Form 990, which discloses funding sources and expenditures.

“The claims from religious extremists that the Johnson Amendment stifles free speech and is some sort of attack on religion are laughable,” said David Silverman, president of American Atheists. “They want zero transparency, zero accountability, and zero oversight all while spending huge sums of money on politics. We have to fight back.”

The Johnson Amendment, first adopted in 1954, ensures that charitable organizations receiving tax-exempt status are focused on issues, rather than politics. The rule does not prevent houses of worship or nonprofit organizations from discussing political issues, engaging in lobbying or advocacy, or even creating candidate scorecards.

American Atheists also joined a letter opposing weakening the Johnson Amendment that included more than 4,500 signatories from a broad range of nonprofit groups including the Girl Scouts of America, Public Citizen, the National Council of Churches, Habitat for Humanity, and the League of Women Voters. Additional letters supporting the Johnson Amendment have garnered the signatures of more than 3,000 individual faith leaders and 99 religious denominations.

A recent poll from Independent Sector shows a huge majority of Americans, 72%, oppose allowing churches and charities to engaging in partisan political activity.

The House Committee on Appropriations will begin markup of this bill on Thursday, July 13.

Your ticket for the: Atheists Tells Congress: Hands Off the Johnson Amendment