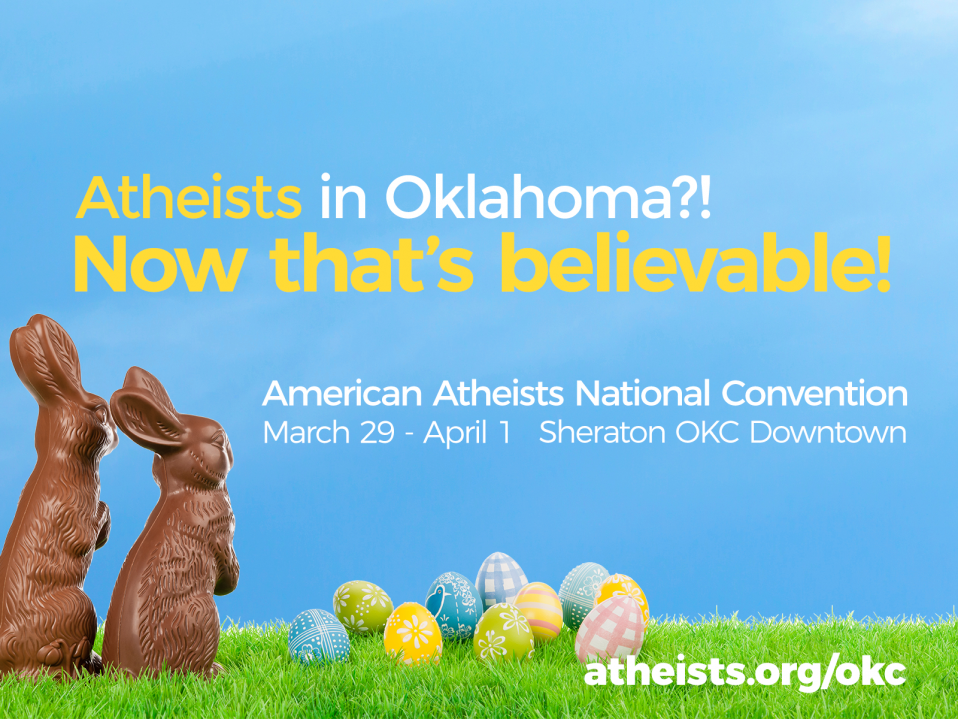 One billboard features an image of actor, director, and musician Hugh Laurie, who will speak on Saturday, March 31 in a conversation with American Atheists president David Silverman. The other billboard shows two chocolate Easter bunnies and includes the text “An atheist celebration? In Oklahoma City? Now that’s believable!”

This design was initially rejected for mentioning “Easter weekend.”

“Our national convention is all about fun and community,” said David Silverman, president of American Atheists. “We’re all looking forward to the fantastic speakers and other programming, but we’re even more excited to welcome hundreds of atheists from all across the country and from right here in Oklahoma City to show just how vibrant the atheist community is.”

Besides Laurie, the national convention will more than two dozen speakers including science advocate and skeptic Yvette “The Sci-Babe” d’Entremont, managing editor of Snopes.com Brooke Binkowski, founder of The Thinking Atheist Seth Andrews, comedians Leighann Lord and Andy Wood, a screening of Bill Nye: Science Guy followed by a discussion with the filmmakers, and many more.

The convention kicks off with workshops on Thursday, March 29 and full sessions beginning at 9:30am on Friday, March 30 at the Sheraton. Social events include a game night and pub quiz on Thursday, a comedy show on Friday, and a dance party Saturday.

On Sunday, American Atheists will host a volunteer service event to pack 30,000 meals for local people in need. After the service project, anyone who volunteers or donates will be invited to an exclusive after-party featuring drinks, dancing, snacks, and some special guests.

More information about the festivities, including tickets, is available at www.atheists.org/okc

Your ticket for the: Atheists Launch Easter Bunny Billboard for OKC Convention