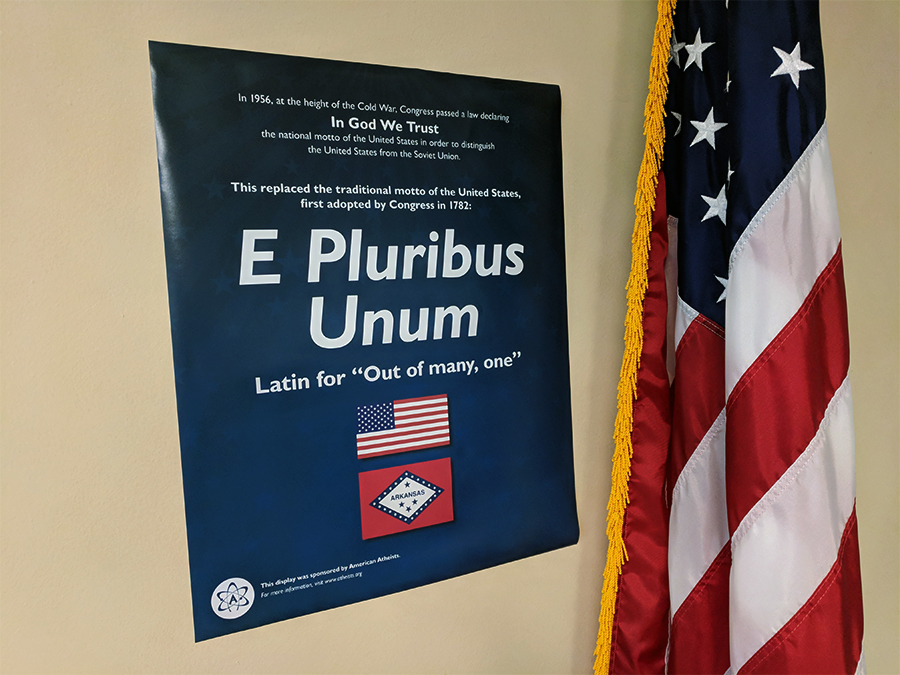 Bentonville, AR—In response to a 2017 law that requires Arkansas school districts to post in all classrooms donated signs or displays that show the national motto, American Atheists Monday announced a donation of nearly 1,000 posters to the Bentonville School District.

The posters donated by American Atheists include both the current national motto, “In God We Trust,” and the original de facto motto of the United States, “E Pluribus Unum,” accompanied by a brief explanation of the changes made to the national motto in 1956. The displays also include a representation of the American flag, the Arkansas state flag, and a link to an instructional webpage that provides additional historical context and information about the national motto: www.atheists.org/motto

“We’re pleased to donate these displays that present the full truth and historical context of our national motto,” said Nick Fish, American Atheists’ national program director. “Proponents of Act 911, including Bentonville’s State Representative Jim Dotson, claim that mandating these displays is about acknowledging our nation’s ‘history and heritage’ in classrooms. But we think students deserve all the facts, not just a poster of an exclusionary and divisive motto devoid of any additional context or information.”

Fish, joined by representatives of the local atheist community, attended the August 20 Bentonville School Board meeting to present the donation. American Atheists has delivered a letter to the district requesting logistical information to complete the donation.

“It’s interesting to note the displays donated by Rep. Dotson don’t actually conform to the law he himself introduced. We look forward to seeing our displays, which do conform to the law, hanging in every classroom in Bentonville,” added Fish. “As Dotson pointed out at the February 19 meeting he attended to make his donation, the school district is required under the law to display the posters that have been donated.”

In 2018, more than 70 bills, many of them similar to Act 911, were introduced nationwide as part of “Project Blitz,” a nationwide campaign by Christian Nationalist groups to reshape state and federal laws by using a distorted interpretation of “religious freedom.” The proponents of these bills hope to roll back civil rights protections and inject the false idea that America was founded as a Christian nation into our public schools.

“This concerted effort to use religion as a weapon against atheists, religious minorities, LGBTQ people, and women is dangerous and un-American,” said Alison Gill, legal and policy director of American Atheists. “This legislation being pushed by Christian Nationalists undermines religious freedom by instilling into the law only one religious viewpoint, theirs, while attacking the separation of religion and government which is the bedrock of our tradition of religious liberty. They admit to starting with ‘low hanging fruit’ like these national motto displays and building momentum to use religion as an excuse to allow discrimination in public accommodations, adoption services, and medical care. We must protect religious liberty from these extremists.”

Fish’s Prepared Remarks to the Bentonville School Board

Letter Sent to the Bentonville School Board

Your ticket for the: Atheists Donate National Motto Displays to Arkansas Schools