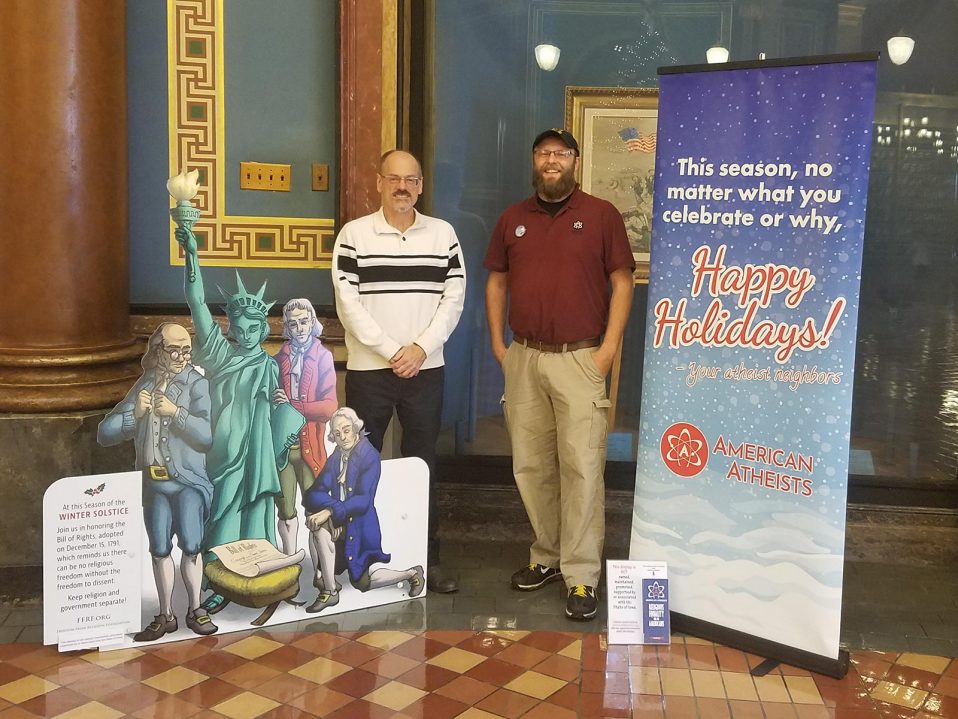 The American Atheists banner reads, “This season, no matter what you celebrate or why, Happy Holidays! (From) your atheist neighbors.” It joins a display created by the Freedom From Religion Foundation and sponsored by Iowa Atheists & Freethinkers that features the founding fathers looking down on the Bill of Rights in a manger. This will mark the first time in statehouse history that two atheist/secular displays have stood together over the holidays.

Justin Scott, Iowa state director for American Atheists, said that the goal of the atheist banner was to promote inclusion during the holiday season.

“The holidays are a special time, but too often, non religious Iowans and those of minority faiths can feel left out,” said Scott. “We hope visitors to the statehouse read our banner and leave feeling welcome regardless of their beliefs.”

This marks the third year that the rotunda has included both the Bill of Rights display and the nativity scene and the first year for the American Atheists display.

“Our displays also serve as a reminder about the importance of the separation between religion and government,” said Geoffrey T. Blackwell, litigation counsel for American Atheists. “Our banner’s inclusion this year showcases how religious freedom is supposed to work.

“I’m proud that our state has shown that no single religion or worldview has a monopoly on holiday cheer,” added Scott.

Your ticket for the: American Atheist Holiday Banner Makes History in Iowa