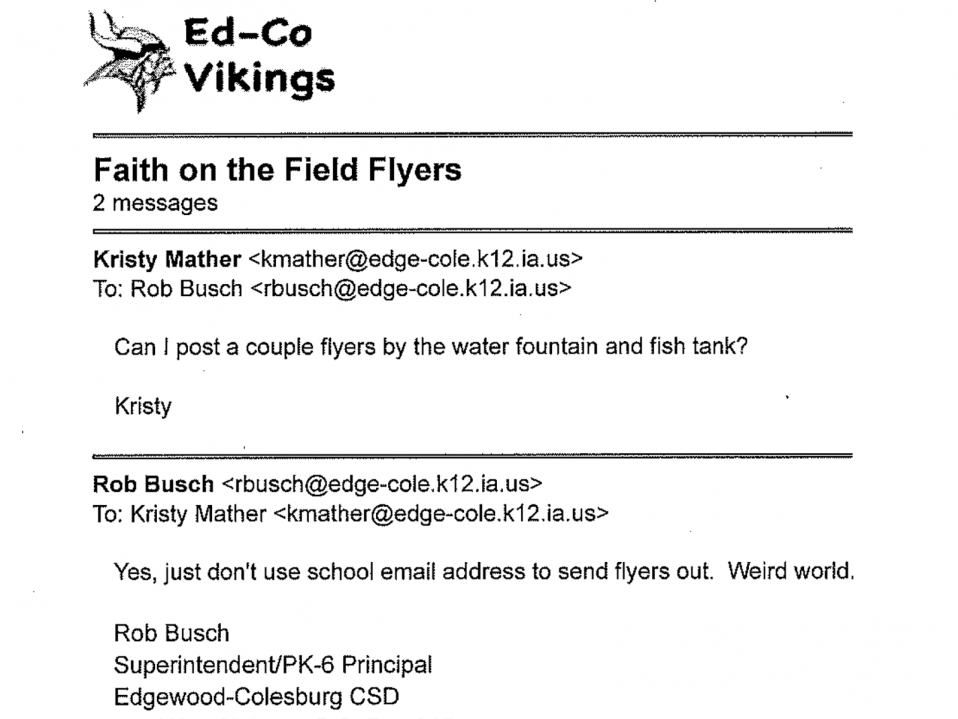 “Students have every right to plan and conduct a prayer event on school property. However, the Constitution bars the school district’s staff from doing so,” said Geoffrey Blackwell, American Atheists’ litigation counsel, who filed a records request with Rob Busch, the Superintendent of Ed-Co CSD. “A review of school district emails shows that tonight’s event is in no way student-organized.”

Kristy Mather, a 6th grade teacher at Ed-Co CSD, took a leading role in organizing the prayer event. In her own words, she has “been on the committee for the last few years.”

“We met tonight to start to plan this event again,” she admitted in an August 13 email to Superintendent Busch and Principal Dawn R. Voss. On the same date, she discussed speakers with guidance counselors Karla Trenkamp and Morgan Weaver and asked about including them in the event. Also on August 13, Athletic Director Roger Wright agreed to help Mather “with the lights, and keys for the concession stand,” while Food Service Director Mandi Pedretti promised to provide 400 paper food trays. In addition, Mather and physical education teacher Makenna Slight agreed to devise games together for the event.

“Not only have Mather and her colleagues planned every aspect of the event—from speakers to materials, activities, and promotion—but Superintendent Busch even counseled the staff to conceal their involvement,” said Blackwell. “They knew what they were doing violated the constitutional rights of their students.”

“I really hate to say this but the school district should NOT send this [event flyer] out. Complaints probably won’t come from our community, but there are weird watch groups out there,” wrote Busch. When Mather asked Busch, “Can I post a couple flyers by the water fountain and fish tank?” he responded, “Yes, just don’t use school email address to send flyers out. Weird world.”

“It is disturbing how far government employees have gone in attempting to conceal unconstitutional actions on the taxpayers’ dime,” said Nick Fish, American Atheists’ president. “If any additional members of the Ed-Co CSD community want to challenge this attack on the separation of religion and government, we ask that they contact us.”

“Since the bulk of these Fields of Faith events are scheduled for October 9, we encourage Americans across the country to let us know about similar issues in their schools in advance of those events,” added Blackwell. “Administrators and faculty at other schools need to understand that the actions taken by Ed-Co staff are grounds for a lawsuit. School officials cannot abuse their positions to force their religious views on students.”

Your ticket for the: Iowa School District Violates the Constitution with Teacher-Led Prayer Event