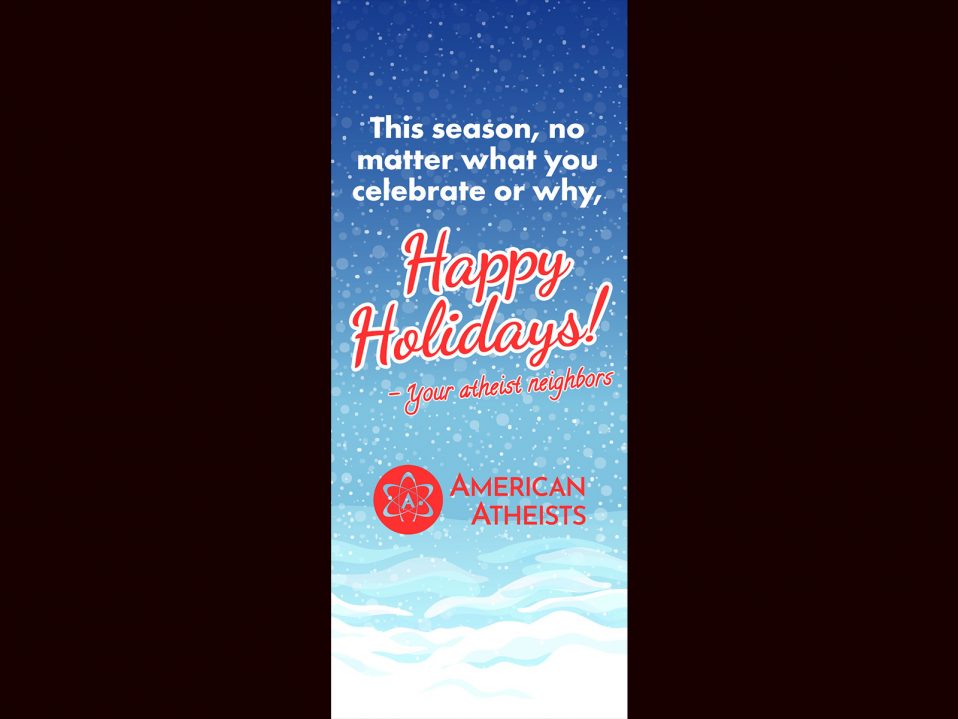 Des Moines, IA—Today, American Atheists announced that seven nonreligious displays will adorn the Iowa State Capitol this December, setting a record for the largest number of secular displays exhibited inside the rotunda.

“The abundance of atheist and secular holiday displays scheduled to appear this holiday season will showcase how vibrant, involved, and connected the growing community of nonreligious Iowans is,” said Justin Scott, American Atheists’ State Director for Iowa, who liaised between the different groups to get as many atheist displays approved as possible.

“These displays represent a wide swath of Iowa: atheist and humanist, college-aged to the more experienced in life, queer and straight, transgender and/or nonbinary, Iowans of all backgrounds, races and socio-economic status, as well as from various parts of Iowa,” he added.

American Atheists’ display shows a snowy scene as background to the words, “This season, no matter what you celebrate or why, Happy Holidays!  —Your atheist neighbors.”

“For as long as I can remember, holiday displays in capitol buildings and courthouses have been the exclusive privilege of the Christian religion,” said Robert Cook of IAF, one of American Atheists’ affiliates. “They put up baby Jesus and the wise men on public property and no one ever thought twice about it.”

IAF’s display shows a bright sun, peeking out from behind a cloud, as it illuminates a snow-covered terrain complete with evergreen trees and the words, “Joy to the world, reason has come!”

“Is there anything about Christianity and Christmas that wasn’t stolen from other cultures and religions?” said Ruth Walker of Eastern Iowa Atheists, an American Atheists affiliate, whose display reads, “Everything Distinctive of Christmas is Pagan or Secular.”

“Christmas decorations and most of modern Christmas music are of pagan or secular roots. ‘White Christmas’ was even written by a secular Jew, so everybody just have fun!” she added.

In total, seven of the eight available spots at the Iowa State Capitol will be filled by a secular group. The Dubuque Area Humanists, Eastern Iowa Atheists, FFRF, and ISUAAS displays are appearing during the first two weeks of December, while the American Atheists, IAF, and SecSI banners will go on display during the last two weeks of the month.

Your ticket for the: Atheist Holiday Displays to Fill Iowa State Capitol in Record Numbers