Nonreligious Young People Helped Put Biden in the White House. New Research Explores Who They Are. 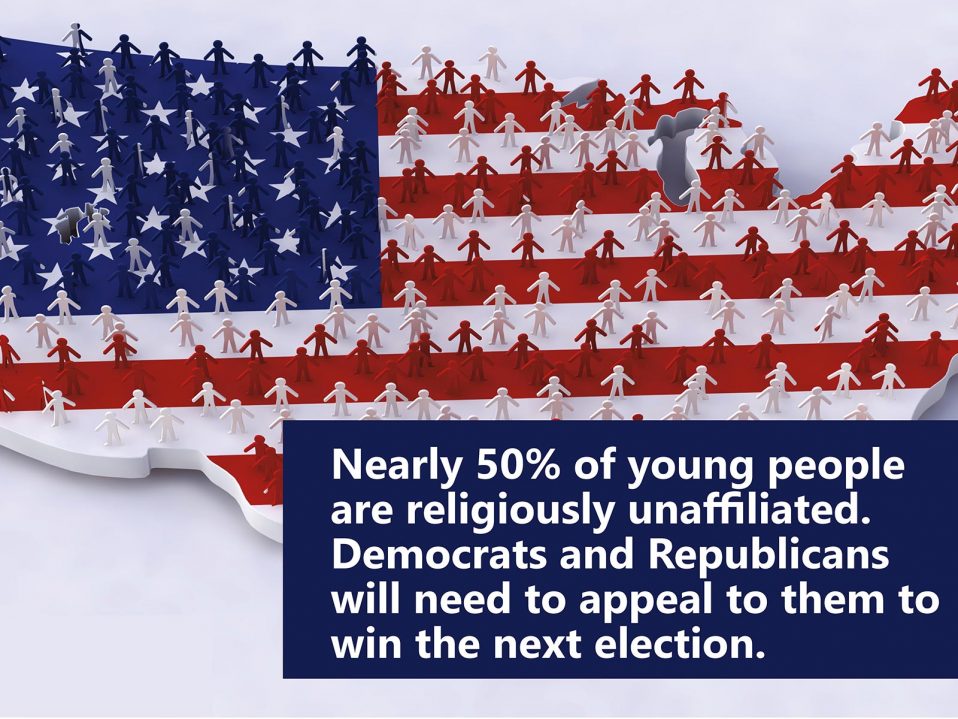 Washington, D.C.—Today, the nonreligious advocacy organizations, American Atheists and the Secular Student Alliance, released The Tipping Point Generation: America’s Nonreligious Youth. The report, which draws on survey responses from nearly 34,000 nonreligious participants, including 3,421 nonreligious 18-24 year olds, provides an in-depth analysis of who nonreligious young people are, the issues they face, and their priorities.

Nonreligious voters are likely the reason Joe Biden won the election, finds Ryan P. Burge, Assistant Professor of Political Science at Eastern Illinois University. And according to recent research from the Cooperative Congressional Election Study and the Barna Group, today’s 18-24 years olds are the most nonreligious generation in the history of the United States. The Tipping Point Generation explores this important and growing subset of young people, who overwhelmingly supported Joe Biden.

“We are at a tipping point in this country. With nearly half of today’s young people religiously unaffiliated, the Religious Right’s hold on power is slipping away. Both the Democratic and Republican parties will have to adjust and increasingly appeal to nonreligious voters. To do so, they will need to understand who nonreligious young people are,” said Alison Gill, Vice President for Legal and Policy at American Atheists.

The Tipping Point Generation report found that there was a high rate of political involvement among the nonreligious youth surveyed, with more than four in five (82.7%) being registered to vote. The top policy priorities identified by these nonreligious youth were maintaining secular public schools, protecting youth from religion-based harm, and protecting the environment and addressing climate change.

The report also found that nonreligious young people face significant stigma and discrimination. 33.6% of participants faced discrimination in education, 20.8% in volunteer work, 20.4% in mental health services, 15.4% in employment, 13.3% in accessing public services, and 12.2% from public businesses.

“Unless you consider the nonreligious aspect of Generation Z’s identity, as well as the discrimination these young people face, you cannot fully understand who they are and what we need to do in our society to help them,” said Kevin Bolling, Executive Director of the Secular Student Alliance.

The report found different levels of discrimination according to an area’s level of religiosity. For example, nearly half (48.9%) of nonreligious young people surveyed faced education discrimination in very religious communities—concentrated in the South and the Midwest—compared to only one fifth in less religious communities, primarily located in the Pacific West and Northeast.

“The religious oppression that nonreligious youth encounter in very religious communities has a lifelong impact and shapes who these youth are and how they think about religion,” added Gill.

In very religious areas, nonreligious young people face an especially high level of family rejection, the report found. Among youth whose parents were aware of their beliefs, more than one third (37.5%) reported that their parents were somewhat or very unsupportive. In very religious communities, more than three quarters (77.9%) reported negative experiences with their families because of their nonreligious beliefs. Youth participants with very unsupportive parents were 45.4% more likely to screen positive for depression than those with very supportive parents.

“To correctly serve his nonreligious youth constituents, Joe Biden must take into account their needs and priorities. Given demographic trends, any administration that fails to energize these voters will lose election,” said Bolling.

Your ticket for the: Nonreligious Young People Helped Put Biden in the White House. New Research Explores Who They Are.

Nonreligious Young People Helped Put Biden in the White House. New Research Explores Who They Are.