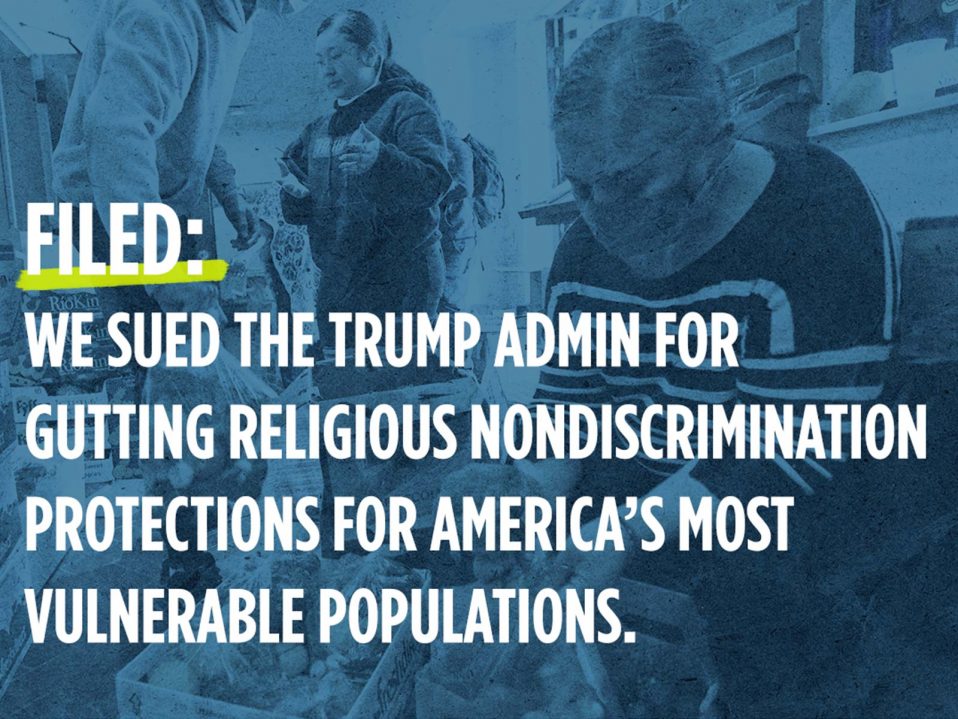 New York, N.Y. — Today, American Atheists joined by a coalition of service and advocacy groups filed suit against the Trump administration for rolling back religious freedom protections that required faith-based organizations providing critical, taxpayer-funded services (like food and shelter) to inform recipients of their legal rights to be free from discrimination, not to have to attend religious programming, and to have the opportunity to get a referral for an alternative provider. The unlawful rule, effective today, makes it harder for already marginalized populations to access essential social services as the U.S. continues to reel from a historic pandemic and economic collapse.

Today’s lawsuit was filed by a group of plaintiffs: MAZON: A Jewish Response to Hunger, SAGE, the New York City Anti-Violence Project, Ark of Freedom Alliance, Freedom From Religion Foundation, American Atheists, and the Hindu American Foundation. Filed against the Trump-led Departments of Health and Human Services, Agriculture, Housing and Urban Development, Veterans Affairs, Education, Homeland Security, Justice, and Labor, the suit seeks to reverse the unlawful rollback of these important protections. Democracy Forward, Americans United for Separation of Church and State, and Lambda Legal represent the plaintiffs.

Upon filing the suit, the groups issued the following statement:

On its last day in power, the Trump administration shredded important religious freedom and nondiscrimination protections for many of America’s most vulnerable populations and made it harder for them to access taxpayer-funded services in the midst of a pandemic and severe economic downturn.

Thanks to the Trump administration’s rollback, faith-based organizations no longer have to inform recipients of taxpayer-funded services that they cannot be discriminated against or be forced to attend religious activities when accessing services. Without this much-needed information, already-vulnerable populations are likely to fear discrimination, needlessly opt to take part in religious activities that contradict their own beliefs or demean their identities, or forgo assistance altogether.

We’re taking our fight against the Trump administration’s unlawful rollback to court so that those in need of help can continue to get it without fear of discrimination or unwanted proselytization.

“Religious groups paid by the federal government to provide services must provide them with no strings attached—not hold them out as a carrot for participating in religious worship,” said Nick Fish, president of American Atheists. “This is an attack on the religious freedom of millions of people in need, and particularly on the third of Americans who do not identify with a religion. No one should be subjected to religious coercion to receive federal benefits. This challenge will empower recipients of benefits to protect their own religious freedom.”

Read the statements from the other plaintiffs here →

On December 17, the Trump administration finalized its sweeping rule, which is effective today and eliminates common-sense requirements that were put in place in 2016. Those requirements were the result of a historic effort to reach consensus on how religion and government should interact in the context of federally funded social services. The Trump administration’s rollback unlawfully puts the interests of religious organizations, which provide a significant slice of federally funded social services, ahead of the rights and needs of the vulnerable populations they serve.

The Trump administration’s rollback has sweeping effects. Without the notice and referral requirements:

Unfortunately, illegal discrimination against service recipients does occur. For instance, a 2020 survey of LGBTQ people experiencing food insecurity found that, while many experiences at faith-based providers were positive, a substantial percentage were not. In the face of this rejection, many decided to forgo the needed food. The Trump administration’s elimination of these common-sense, “know-your-rights” requirements deprives vulnerable populations of the information they need to fight discrimination.

The Trump administration’s rollback is arbitrary and capricious. Among other things, it provided no reasonable explanation for the rule change, failed to account for its harms, and failed to consider obvious alternatives to the changes they finalized — all in violation of the Administrative Procedure Act.

The lawsuit was filed on January 19 in the U.S. District Court for the Southern District of New York.

Your ticket for the: American Atheists and Other Groups Sue Trump Admin for Gutting Religious Freedom Protections in Social Services Programs