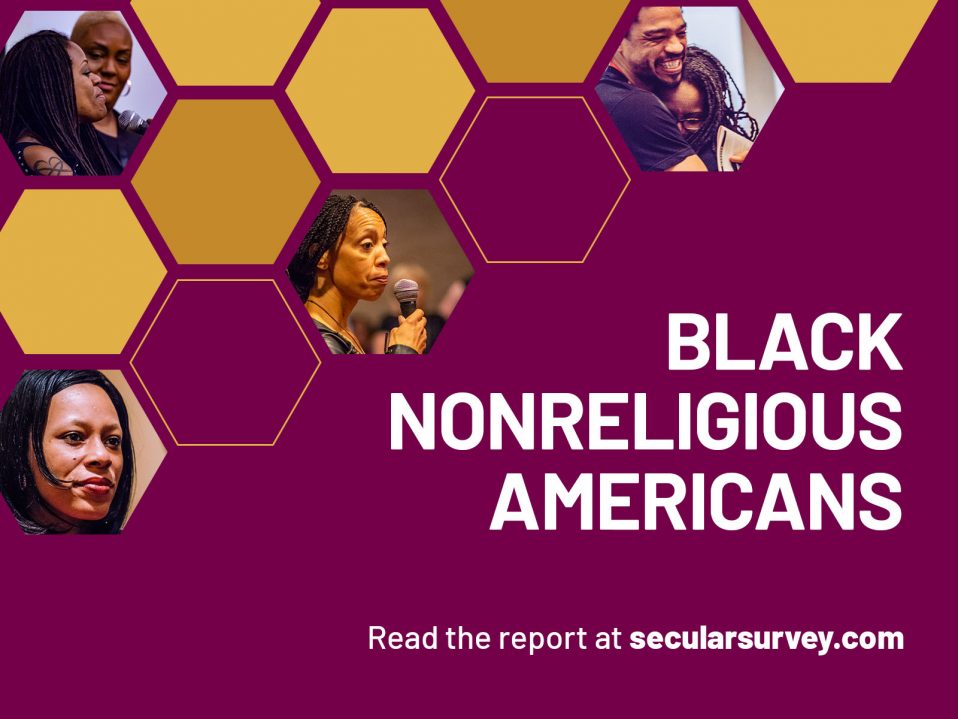 Washington, DC—Today, the atheist organizations American Atheists and Black Nonbelievers released Black Nonreligious Americans, a report based on a survey of 891 Black participants, drawn from a larger survey of nonreligious people living in America, organized by a team of researchers at Strength in Numbers Consulting Group.

The data indicates that Black nonreligious Americans often hide their nonreligious beliefs, even from their close family members, out of fear of rejection. Further, rejection by family members is likely to result in depression and other negative outcomes, the report found. To help reduce these harms, Black Nonbelievers and American Atheists encourage families and communities to fully accept nonreligious people. They are also calling on the media to avoid the false stereotype that all Black Americans are religious.

“Black organizations and members of the media too often overlook the struggles of Black atheists,” said Debbie Goddard, Vice President for Programs at American Atheists and former director of African Americans for Humanism. “Many of us have experiences that are distinct from those of other Black people but also from those of most atheists. This report helps tell the stories people need to hear about the experiences of those of us who live at the intersection of being both Black and nonreligious.”

“The higher level of concealment and anguish among Black participants demonstrates how much stigma there is around nonbelief in our communities. When we do come out, our families often aren’t receptive, and many feel like they are alone,” said Mandisa Thomas, founder and president of Black Nonbelievers. “This is one of the primary reasons Black Nonbelievers was created—to provide a supportive space for Black atheists who face rejection by their families and communities. We also advocate on behalf of Black atheists and religion doubters to rally against the dominant religious narrative, especially pertaining to matters of racial justice.”

“For believers, social circles are often limited to those who are ‘equally yoked’ or just like you. Opportunities to hear and learn different ways of thinking, philosophy, other religious thoughts, nonreligious life, diverse cultures, music, film, etc., are missed,” says Suandria Hall, a National Certified Counselor (NCC). “It’s no wonder that those who leave their faith struggle tremendously to connect and make friends. Social anxiety can develop along with depression and adjustment disorders. Finding and learning to connect outside of religion becomes the necessary task toward healing.”

“This report provides data about the deleterious effects that stigma and discrimination can have on Black nonreligious Americans. We know that gender, sexual orientation, age, wealth, and location all do, as well. This report helps us better understand the diversity of the lived experiences of Black Americans,” added Debbie Goddard.

Your ticket for the: Black Atheists Often Feel Forced to Hide Their Beliefs, Resulting in Significant Harm, New Research Finds