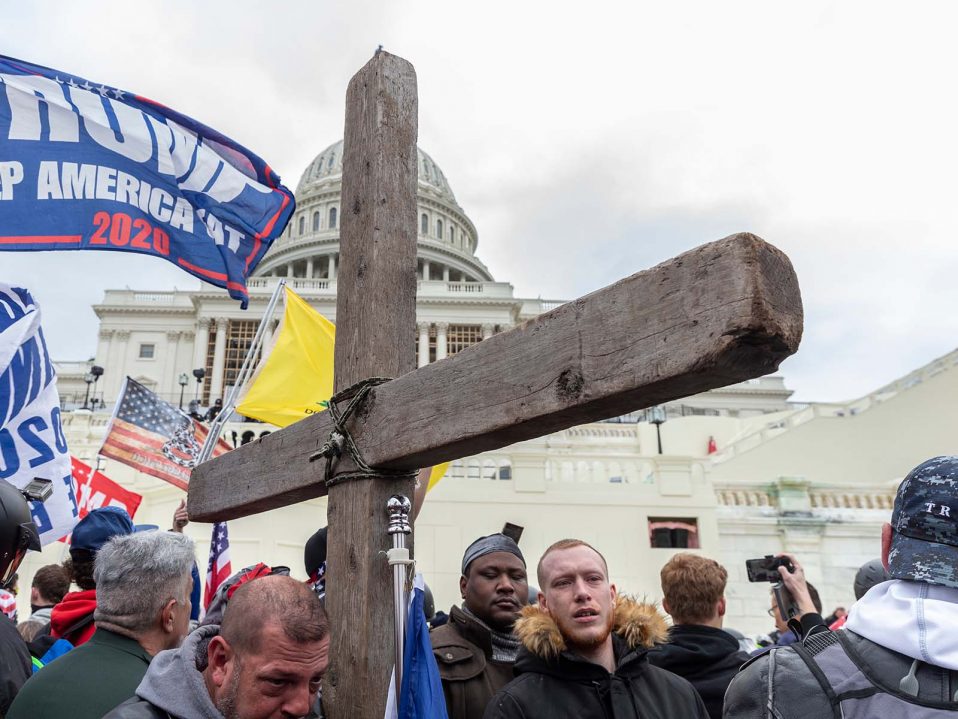 Washington D.C.—Today, the religious equality watchdog American Atheists sounded the alarm on Christian nationalists’ likely strategy for 2022. This warning draws on the large body of research and trends published today in the organization’s 2021 State of the Secular States report. Now in its fourth annual edition, this report provides the most comprehensive review ever of statewide laws and policies affecting church-state separation and religious equality in all 50 states, Washington D.C., and Puerto Rico.

“Overall, 2021 was the worst state legislative session for civil rights in more than a decade,” said American Atheists’ Vice President of Legal and Policy Alison Gill, who authored the report. “Unless the media and advocates shine a light on white Christian nationalists’ unprecedented attacks on our democracy, this extremist movement’s momentum will only increase in 2022.”

Based on the state legislative data from 2021, American Atheists anticipates the continuation of at least three dangerous trends: 1) a wave of harmful state-level Religious Freedom Restoration Acts (RFRAs), 2) denial of health care legislation, and 3) legislative attacks on public schools.

From 2016 until 2020, not a single state RFRA became law. Public opinion was largely against RFRAs for targeting LGBTQ people’s rights. Last year, legislative activists took advantage of the COVID-19 pandemic to rebrand RFRAs as necessary to “protect” churches from limitations on in-person gatherings. Yet these laws are virtually indistinguishable from those introduced in previous years—and just as discriminatory. In 2021, three states—Arkansas, South Dakota, and Montana—passed RFRAs. Since these bills succeeded, American Atheists forecasts attempts to pass even more RFRAs in 2022.

Also in 2021, two states—Arkansas and Ohio—passed bills that allow hospital CEOs, hospital boards, employers, and even insurance companies to deny any health care service based on personal religious beliefs. In the past, state legislatures had passed denial of care bills that only focused on specific services, such as abortion or contraception. American Atheists anticipates a flurry of dangerously broad denial of care bills in 2022.

The organization also predicts increasingly sophisticated legislative attacks on public schools. For example, hybrid bills that combine anti-trans youth policies with religious denials of health care have appeared. Similarly, Florida passed legislation focusing on “parental rights,” grouping together such disparate items as 1) preventing schools from requiring masking or vaccination 2) forcing teachers to “out” LGBTQ students to their parents and 3) preventing the teaching of any material of which a parent religiously disapproves.

“White Christian nationalists may not physically attack the Capitol again, as on January 6. But the movement is assaulting the rights of atheists, racial and religious minorities, LGBTQ people, and many others with their extremist legislation,” said Nick Fish, president of American Atheists. “Now that we know their strategy, advocates, the media, and lawmakers must shine a light on these attempts to wield religion as a weapon. Our democracy is on the line.”

View the full report at www.atheists.org/states or in pdf format.

Your ticket for the: New Report Forecasts Christian Nationalist Movement’s Strategic Actions in 2022