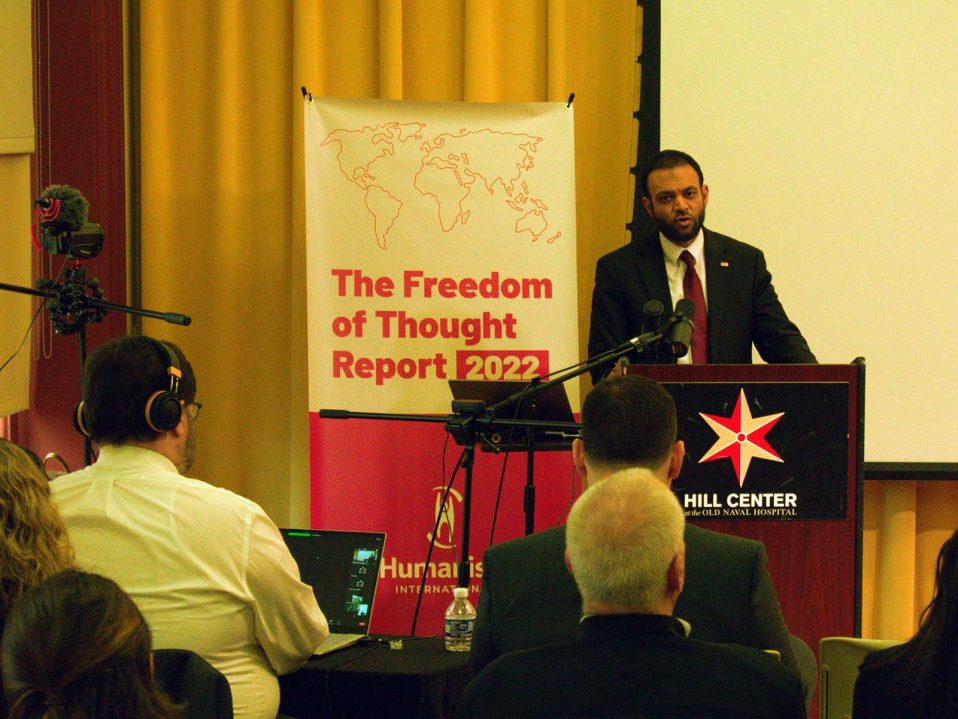 Washington, D.C.—On December 8, the religious freedom watchdog American Atheists held a briefing for Humanists International’s 2022 Freedom of Thought Report at the Hill Center. The report, now in its eleventh edition, assesses every country in the world on the basis of human rights and the legal status of humanists, atheists, and other nonreligious people.

“The United States strongly supports freedom of religion or belief, including for those who do not have religious beliefs. This freedom extends to everyone and to everywhere,” said Ambassador Hussain. “The United States government opposes laws that impede individuals to choose or practice a faith, change their religion, or choose not to practice a religion. We do so not only because it is the right thing to do but because we know that these laws undermine peace and security.”

“We advocate for the right of every person to organize their life according to their conscience. No one should have the religion or values of another imposed on them,” he added.

“Unfortunately, humanists and atheists have often been targeted with violence and repression when they seek to manifest their beliefs. Several countries have laws criminalizing atheism or activities that advocate humanist thought,” said Commissioner Davie. “USCIRF is steadfastly committed to promoting freedom of religion or belief for all, including humanists, atheists, freethinkers, and other nonbelievers. After all, Article 18 of both the Universal Declaration of Human Rights and the International Covenant on Civil and Political Rights protect not only the right to believe in and practice a religion and to change religion but also the right to hold nontheistic or atheistic beliefs.”

Humanists International’s 2022 Freedom of Thought Report has found that only 4% of the global population live in societies with a clear separation of religious and political authorities, in societies that do not discriminate against any religion or belief community. According to the organization’s research, 70% of the world’s population live in countries where the expression of humanist values is severely repressed, where the full realization of one’s right to freedom of religion or belief is impossible. Speakers at the event repeatedly brought up the case of Mubarak Bala, a Nigerian humanist leader jailed for 24 years.

“As much as we speak about this issue as an international one, we would be remiss to not focus on the discrimination against secularists right here in our country,” said U.S. Representative Jared Huffman (D-CA-2), co-chair and co-founder of the Congressional Freethought Caucus, in a pre-recorded video. “Individuals still face threats, intimidation, social stigma, discrimination. There are even outdated laws that prevent them from holding office in multiple states in this country today.”

For this 2022 edition, Humanists International placed the United States on its watch list. The report speaks favorably of the U.S.’s “strong constitutional protections in favor of thought, religion or belief and freedom of expression” and “a deep-rooted cultural emphasis on individual freedom.” However, the report also notes attempts to undermine “the inherent secularism of the constitution and standards of non-discrimination, for example on the grounds of gender or sexual orientation, in the face of arguments grounded in spurious ‘religious freedom’ and conscience claims.”

“Extremism in religion continues to pose a serious threat to our democracy … We don’t have the luxury to ignore this toxic combination of religious bigotry and violent political ideology wherever we find it,” added Huffman.

Further remarks and the full event recording can be found here.