In 2017, the Arkansas legislature passed Act 911, a law requiring all classrooms and libraries in the state to display the national motto, “In God We Trust,” along with the flags of Arkansas and the United States.

The law’s sponsor, Rep. Jim Dotson (R-Bentonville), said that the intention was to display our nation’s “history and heritage” in classrooms. However, in an interview on HLN, he admitted that the purpose of the displays is an “acknowledgement of God in public life.”

American Atheists is committed to acknowledging our nation’s true “history and heritage” rather than just the religiously-motivated “In God We Trust” motto.

Are you a teacher in a district with “In God We Trust” displays? Would you like a poster from American Atheists to hang in your classroom? Let us know!

According to the 2017 Arkansas law requiring the display of the national motto posters, the following elements are required to be shown:

If posters meeting all of these requirements are donated, then public buildings or facilities that are maintained or operated by state funds are required by law to display them. However, Act 911 does not preclude additions to the three requirements.

American Atheists is committed to providing students and the public with the full and accurate history of our nation’s motto. Therefore, we will be making donations of laminated posters to Arkansas schools for use in all classrooms and libraries.

We believe that our posters are valuable educational tools that will provide students with an accurate, historical, and contextual understanding of the national motto. More importantly, our posters meet all statutory requirements, and schools are therefore required to display them.

Help us tell the full story about our nation’s motto and defend the separation of religion from government by making a tax-deductible donation today!

“In God We Trust” became the official motto of the United States in 1956 under President Dwight D. Eisenhower. However, this motto had nothing to do with our nation’s origin and didn’t first appear on coinage until almost 100 years after independence.

Our nation’s first motto, the 13-letter E Pluribus Unum, was proposed in 1776 by Thomas Jefferson and Pierre Eugene du Simitiere as part of a design for the first seal of the United States of America. The origins of the phrase itself can be traced back to Marcus Tullius Cicero’s De Officiis, written in 44 BC. Paraphrasing Pythagoras, Cicero wrote: “When each person loves the other as much as himself, it makes one out of many (unus fiat ex pluribus).”

At a 1988 hearing before the Subcommittee on Consumer Affairs and Coinage of the House Committee on Banking, Finance, and Urban Affairs, then-president of American Atheists Jon Murray testified in opposition to “In God We Trust” appearing on coins commemorating the Bicentennial of the Constitution. During his testimony, Murray said, “Having come from nations which were essentially theocracies, having seen theocracies develop among the colonies, and noticing the abuse therein, all references to God […] were deliberately excluded from the Constitution.”

The Great Seal of the United States, for example, was conceived in 1776, when Franklin, Adams and Jefferson were given the initial task by Congress of designing it. It was Jefferson who suggested E Pluribus Unum for its motto. That motto survived six years of debate before the final adoption by Congress as part of the Seal in 1782, just five years before the Constitutional Convention in 1787.

If that motto was good enough for the Founding Fathers and the Great Seal of the United States, it should be most appropriate for coins today. “In God We Trust” was not suggested at the time period of the formation of our Constitution that [this bill] seeks to commemorate on modern coinage. That phrase was introduced in 1861, some 72 years or three generations of Americans later, by a member of a single fanatical group that sought to convert our Nation into an official theocracy.

According to the U.S. Department of the Treasury, “In God We Trust” was first put on coins in 1864 at the urging of Rev. Mark Watkinson of Pennsylvania, largely “because of the increased religious sentiment existing during the Civil War.” In a letter to Treasury Secretary Salmon P. Chase, Watkinson requested a statement be put on the nation’s coinage acknowledging “Almighty God in some form” in order to “relieve us from the ignominy of heathenism”:

One fact touching our currency has hitherto been seriously overlooked. I mean the recognition of the Almighty God in some form on our coins.

You are probably a Christian. What if our Republic were not shattered beyond reconstruction? Would not the antiquaries of succeeding centuries rightly reason from our past that we were a heathen nation? What I propose is that instead of the goddess of liberty we shall have next inside the 13 stars a ring inscribed with the words PERPETUAL UNION; within the ring the allseeing eye, crowned with a halo; beneath this eye the American flag, bearing in its field stars equal to the number of the States united; in the folds of the bars the words GOD, LIBERTY, LAW.

This would make a beautiful coin, to which no possible citizen could object. This would relieve us from the ignominy of heathenism. This would place us openly under the Divine protection we have personally claimed. From my hearth I have felt our national shame in disowning God as not the least of our present national disasters.

During the Cold War, in an attempt to differentiate the United States from the Soviet Union, the U.S. Congress passed a joint resolution in 1956 “declaring In God We Trust the national motto of the United States.” The resolution was passed without debate and without any dissenting votes in either the House or Senate.

Since then, numerous legal challenges have been undertaken, including one in the Fifth Circuit Court of Appeals by Madalyn Murray O’Hair (O’Hair v. Blumenthal) in 1979. However, the courts have held, despite the legislative record from the debate over the national motto’s adoption in 1956, that “the primary purpose of the slogan was secular.”

However, there has never been a legal challenge to the types of laws being passed that require the display of the motto in public schools.

Do you support our legal advocacy to protect the absolute separation of religion from government? Make a tax-deductible contribution today!

In recent years, religious organizations, under the guise of acknowledging the “heritage and history” of the United States, have begun inserting references to the “In God We Trust” motto into more and more public spaces, including public school classrooms, police cars, government buildings, and license plates.

However, many of these advocates have not revealed their real reason for these actions. A 2018 report showed that Christian nationalist groups were coordinating efforts to pass laws designed to “overwhelm state legislatures with bills” that “use the coercive power of government to secure a privileged position in society for their version of Christianity.” They’ve named their campaign “Project Blitz.”

“It’s kind of like whack-a-mole for the other side; it’ll drive ’em crazy that they’ll have to divide their resources out in opposing this,” David Barton, the Christian nationalist historian and one of four members of Project Blitz’s “steering team,” said in a conference call with state legislators from around the country that was later made public.

The first step in their attempts to advance their religious agenda are these so-called “symbolic gestures” that seek to put “In God We Trust” in as many public places and government facilities as possible. These actions steep American culture in one particular religious view and open the door to further intrusions into public life by religiously motivated legislation. Advocates of Project Blitz are proposing laws that promote and teach Christianity in public schools and, most disconcertingly, laws that would gut civil-rights protections for LGBTQ people and also allow state funding to be directed to religious organizations that engage in discriminatory behavior. 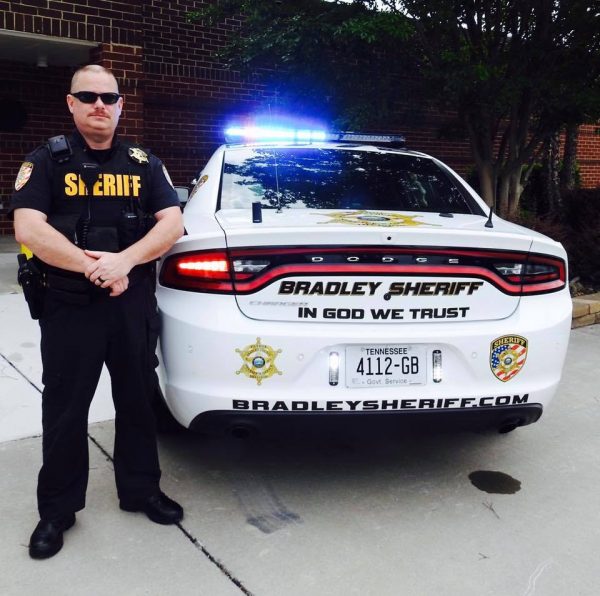 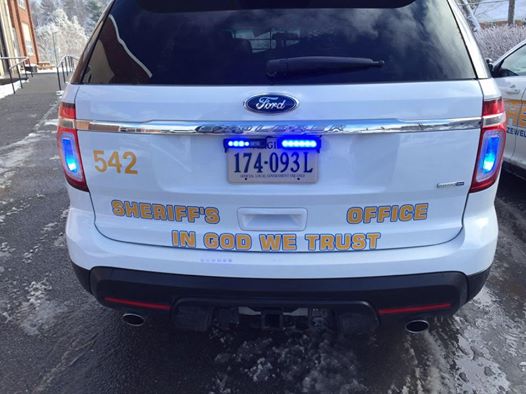 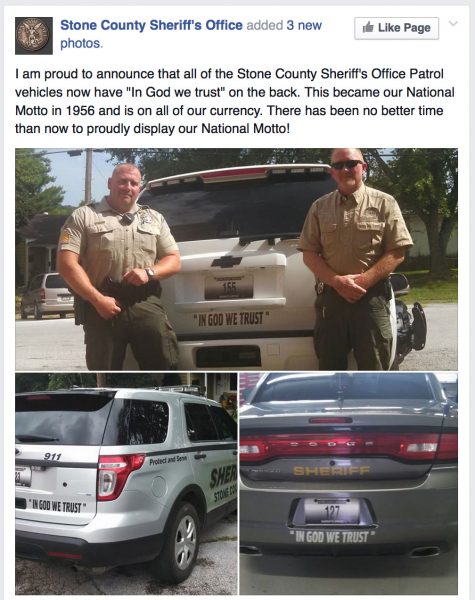 We have also learned that other organizations are donating posters which do not comply with the requirements of Act 911.

For example, state Representative Jim Dotson, who sponsored the bill that became Act 911, recently presented 891 framed copies of a poster that was donated to the Bentonville School District by the American History and Heritage Foundation. It was framed by the American Legion Post using materials supplied at a discount from Hobby Lobby.

Rep. Dotson’s posters depict “In God We Trust” in a large font, with the American flag placed in the bottom left-hand corner of the poster, and the Arkansas flag in the bottom right-hand corner. The layout of these posters does not conform to Act 911’s requirement that the United States flag be centered under the national motto. Therefore, these posters should not be displayed.

Does your school district or town have displays posted that don’t conform to Arkansas law? Are teachers, administrators, or outside organizations using these displays to proselytize or otherwise violate the law?

Your ticket for the: National Motto Displays