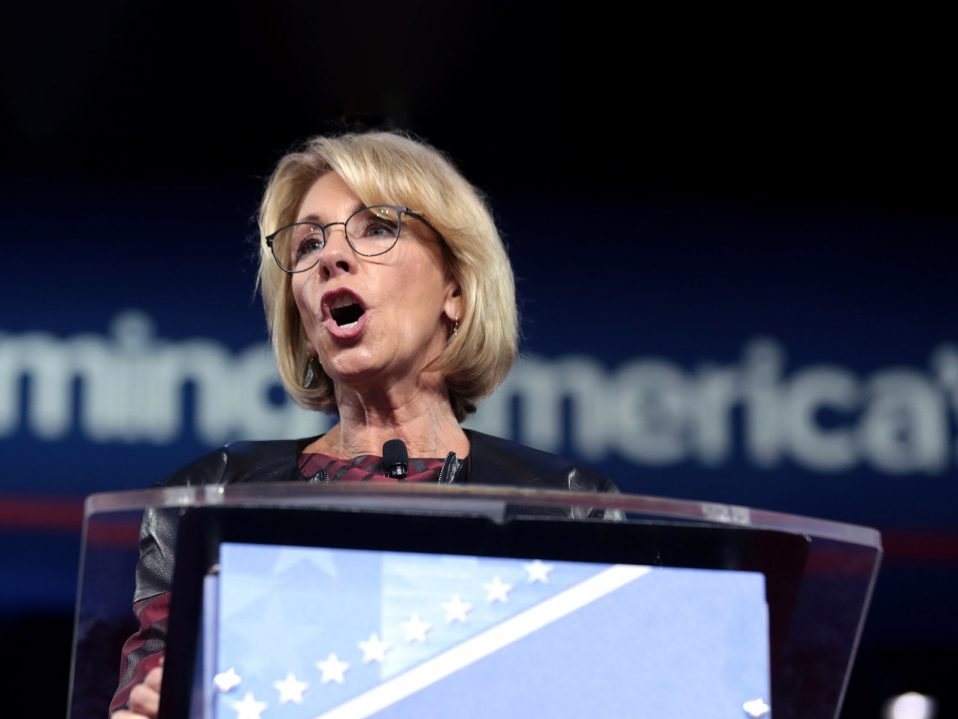 “Too many misinterpret the ‘separation of church and state’ as an invitation for government to separate people from their faith. In reality, the First Amendment doesn’t exist to protect us from religion. It exists to protect religion from government,” said Secretary of Education Betsy DeVos in a statement.

“Betsy Devos and her cadre of religious extremists are reinterpreting the law for the sake of letting bigoted personal beliefs trump all other considerations, including essential nondiscrimination protections for vulnerable students,” said Alison Gill, Vice President for Legal and Policy at American Atheists. “This is government sponsorship of discrimination couched in Orwellian language of religious freedom.”

“Few figures in contemporary American history have been as destructive for religious freedom as Betsy DeVos. Ignoring the religious freedom of the large majority of Americans—who believe that religion cannot be used to discriminate against LGBTQ Americans, people of color, women, religious minorities, and atheists—is an attack on religious freedom itself,” added Gill.

In January of this year, DeVos proposed stripping discrimination protections from Americans receiving taxpayer-funded services from religious providers. Additionally, the Department of Education is trying to remove notice and referral protections, which inform recipients that they can receive similar, nondiscriminatory services by secular providers.

“DeVos’s plan to remove protections for religious minorities and atheists lays bare her intention to help out her fellow conservative Christians—at the expense of all other religions and philosophical views. It’s symptomatic of her long-term goal of using religion to punish those who get in the way of her extremist agenda,” said Gill.

Then, in the wake of the coronavirus crisis, Betsy DeVos repeatedly announced her intention to force school districts to redirect coronavirus relief funds from public schools to private, religious schools, many of which discriminate. For example, in July, the Department of Education released an interim final rule that prevents public schools from using coronavirus relief aid to benefit all students unless private, religious schools are provided with a proportional share of the aid.

“For DeVos, religious freedom means enriching religious groups—and especially those that discriminate—with government funding,” said Gill. “Of course, she overlooks the fact that our country’s Founders held the exact opposite view.”

In 1779, Thomas Jefferson wrote in the Virginia Statute for Religious Freedom that “to compel a man to furnish contributions of money for the propagation of opinions which he disbelieves and abhors is sinful and tyrannical.” James Madison expressed the same sentiment in his Memorial and Remonstrance Against Religious Assessments, writing that not even “three pence” in taxes should go to religious education.

“Nothing is more un-American than allowing powerful religious interest groups to invoke faith to get away with harming the powerless,” said Nick Fish, president of American Atheists. “It shocks the conscience to put the interests of discriminatory schools over the religious freedom of students. Then again, this is Betsy DeVos we’re talking about.”

Your ticket for the: American Atheists Blasts DeVos’s Assault on Religious Freedom and Vulnerable Minority Groups